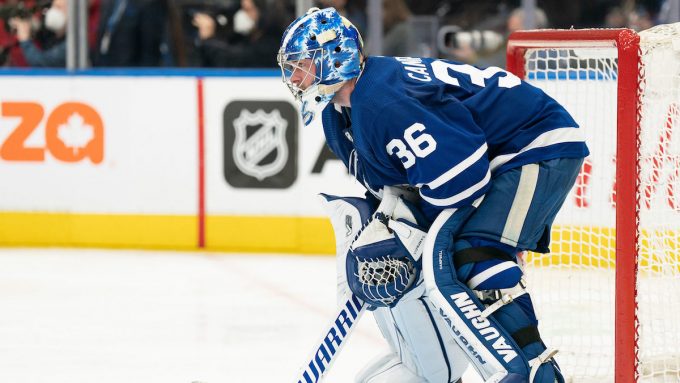 One of the biggest questions facing the Toronto Maple Leafs continues to go without an answer as we approach the 2022 Upper Deck NHL Draft. What is going on with Jack Campbell‘s status with the team?

That’s the decision Kyle Dubas and staff will ultimately have to make. While it’s certainly not the end of the road yet for Campbell and the Maple Leafs, time is slowly starting to run out on a possible decision.

Campbell’s agent Kurt Overhardt recently told the Athletic: “We’ve had a couple of conversations. I think it’s been reported that we haven’t exchanged numbers or anything like that. But we continue to have a good dialogue.” (From Latest on Jack Campbell-Maple Leafs negotiations and more: What we’re hearing, Jonas Siegel, The Athletic, 6/15/2022)

There may be good dialogue, but there appears to be no real updates on negotiations otherwise. This means facing the possibility of Campbell moving on in free agency. With just under $8 million in cap space and only 17 players signed, dollars are tight. Unless they’re able to do something with Petr Mrazek, the Campbell era is likely over.

If it comes to that point, where will Campbell end up? That’s what our focus will be on here. He will want to go somewhere that has both cap space and number-one opportunity from the start. He’s done everything possible to set himself up for his chance to cash in. His performance against the Lightning in the first round certainly caught the attention of possible suitors.

In looking at the current state of teams, three teams stand out as the most logical destinations for Campbell should he leave the Maple Leafs. Who are they?

How juicy would this storyline be? If you can’t beat them, join them, right? The Sabres have enjoyed recent regular-season success against the Maple Leafs. Perhaps Campbell wants to get in on the winning side for once.

All kidding aside, the Sabres have significant questions in their crease. They have a need for a veteran guy to play alongside up and coming goalie Ukko-Pekka Luukkonen. The question here is two-fold.